Home » TB BOARD | INTERVIEW TO THE ARTIST – VIOLET DENNISON 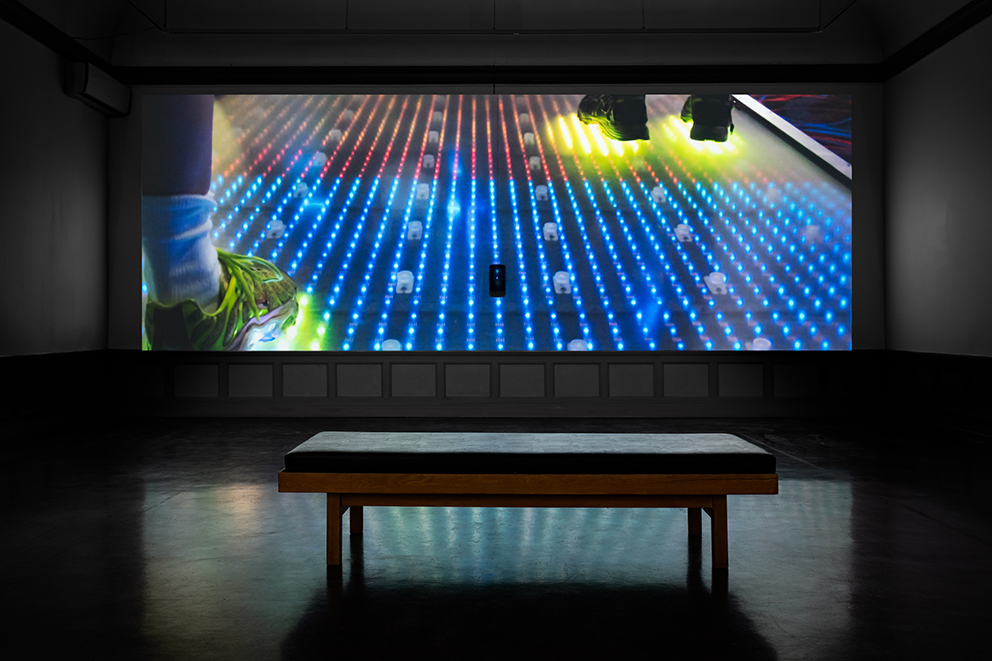 TB BOARD | INTERVIEW TO VIOLET DENNISON

Laura Baffi – What is the file rouge, or better, the conductive thread of your artistic research?

Violet Dennison – My work has always been invested in how technology, infrastructure and consequently pollution, shape the human body.

LB – Most of your works use electromagnetic, sound frequencies and waves. Where did your interest for the “invisible audible” come from?
VD – Initially I was drawn to the scale of the electromagnetic flow layer, how it acts as a hyperobject, (as defined by Timothy Morton) and I wondered if wireless networks can operate like “Ki” or spiritual energy.
I made the first frequency works in 2017, some of which included Radio Frequency Transponders. At that time I began more research on the applications of sound frequencies and electromagnetic waves. Specific technologies directly influenced my show at Kunstverein Freiburg, for instance the tool, Marketing ‘Beacons’; that apps use to track consumers via ultrasonic frequencies. I use Data-over-sound technology as part of a piece in the show. This technology is essentially a Morse code communicated externally through speakers that only electronics can understand.

LB – What were your goals in the Dance Dance Revolution video? Getting the public into a repetitiveness cycle? Are you, or have you ever been, an amusement arcade regular client?
VD – I never was a regular at the arcade. I played a lot of video games and computer games at home. My earliest memory interacting with a computer was playing a game.

LB – The colors you use for the pauses between one game session and the other one, contribute to instilling a trance state, projecting the viewer into the alienating dimension of the game. Even if it is intended as a pause, the public remains alert and awake. So, the reprogramming could have a double meaning: bothering and therapeutic. Would the animation want to distract us or make us even more involved? Would it relax us and have a beneficial effect on the public (I think of chromotherapy), or bother us?
VD – As you rightly point out, it is operating in various ways. I’d like to think it functions in a similar way to the arcade game, Dance Dance Revolution, as it creates both an addictive behavior cycle via the “pauses” and also a trance state. The animation “pause,” as you refer to it, creates a type of unpredictability in the video and triggers a reward when the viewer waits for the next gaming session to occur. The trance type state is created through rhythmic visual and auditory patterning that emulates the psychotherapy treatment, Eye Movement Desensitization and Reprocessing. This experience creates a bilateral stimulation of the brain.

LB – The movement of the dancer, whose sneakers are framed, speeding up gradually. It becomes almost ridiculous, and appears as the parody of a danse macabre where you let yourself go in a reflective state of mind.
There is in Dance Dance Revolution an attempt of symbiosis between the human being and the machine, which reaches a limit-point: even if you hold yourself to the safety bar, you can’t go beyond a certain speed. In this regard, the German media theorist Siegfried Zielinski affirmed that ‘men are the best machines’. What do you think about this statement?
VD – I would alter this statement to say “humans are best with machines.” Humans are optimized via technologies, like Apple Watch or Vaccines. It’s a symbiotic relationship where the self, consciousness and the soul are complemented by analytics and unlimited cloud storage, for example. I see technology as an extension of the human body. The description you gave of my piece Dance Dance Revolution highlights this relationship. The Arcade Game trains the gamer to be a hyperattentive surrogate to the machine. It teaches strange and tactical movements that enhances performance and releases endorphins. Dance Dance Revolution shapes the human body, mind and spirit through control. We invent fictions and we transform ourselves to be a part of them.

LB – On the Net I found an old project of yours very interesting! I am talking about Violet’s Café: could you tell us about it, perhaps starting from the choice of the title?
VD – Violet’s Café was an experimental artist run space that I operated with Scott Keightley and Graham Hamilton from 2013-2015. We conceived the project while all working at a restaurant together, (bus boy, waitress and bartender). The name riffed off of that. As an homage to its conception we’d always serve food at the openings. Often times the food was some extension of the artwork, including our own “vintage performance wine”. The name created a blurry authorship as we collaborated as the three members and with friends. It was a fun project that I miss a lot. The spirit of the Violet’s Café can be encapsulated by a phrase Scott would say, “we can’t fail because it is an experiment.”