Home » TB BOARD | INTERVIEW TO THE ARTIST – VEIT LAURENT KURZ 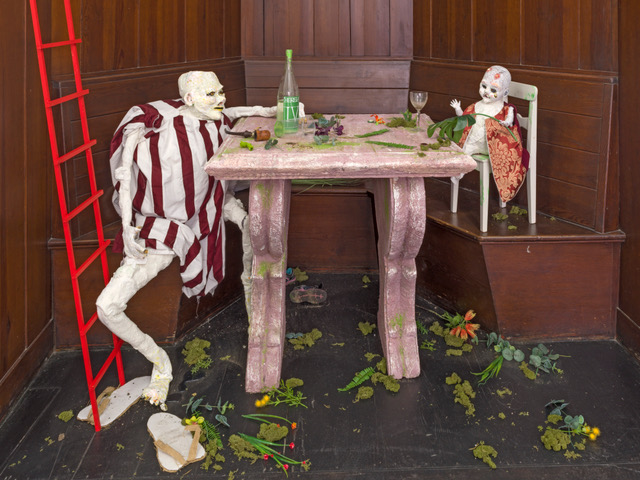 Laura Baffi – You were named the award-winner of the 42nd edition of the Matteo Oliviero Award, the Contemporary Art contest co-run by The Blank, where you will be the protagonist of the exhibition at Casa Cavassa in Saluzzo. The solo exhibition should have been inaugurated on April 24th, but, like many other events, this one has also been postponed to a future date. So, I seize this opportunity to ask you to synthetically present your artistic research to everyone who, even beyond the public here in Saluzzo, doesn’t know you yet.

Veit Laurent Kurz – My artistic practice objectives within installations that mostly consists out of paintings, drawings and sculptures. Over the last years I developed a way how to integrate film and writing as a method of personal research and its integration as integral works into these installations. As a Tracking method those two medias record my thoughts along a more object oriented studio practice.

My hope is to capture conscious and subconscious elements. My interest in archeologic and biologic phenomenas brought, through a visit in Pompeii, volcanoes to my attention. The fate of that city through the Vesuvius as well as the present danger of the Campi Flegrei under Naples, drew my attention intensely.
As another strain, and driven by personal trauma, I followed the conception of nuclear powers in our civilisation and the thread they create based on accidents in the near past. Volcanoes as well as Nuclear Power Plants seem to have similarities within their geographic integration in our human life as well as the thread they mean.
The Installation I develop for Saluzzo is an interwoven story that brings those two places, formed from a scientific and personal research together and by this uses words from each of those world as its vocabulary.

LB – The intention of your characters – correct me if I’m wrong – known as the Dilldapps, is to have a benevolent effect on the visitors, since they are “advisers”. Rather than familiar, the Dilldapps seem alien to us. Maybe your intention is to unleash the uncanny?

VLK – The first time I encountered the Dilldapp was in a book about carnival that had its origin in the Hunsrück-Area (Germany) which is close to where I grew up. There was no photo or illustration but I liked what I read and for some reason my mind kept on spinning the attributes of this species. I kept the name of the Dilldapp but soon the species entered my practice as my own alter ego. By this it would change its role and function within the installations. For some time now I develop my installations in dialog with this creature and it helps me to have a changing perspective on my practice as well as an eye for detail within the developing narrative. In this way the Dilldapp is an advisor to the audience but also to myself. It reminds me of a responsibility that my narrative should have without crossing the line to pure fiction.

LB – According to the contemporary philosopher Slavoj Žižek, sometimes, although we do recognize that what we are experiencing – or appealing to – is a deception, we still persist in considering it real, or, in other words,  we play along. I find this consideration to be interesting, if applied to your artistic practice: we do know the Dildapps’ imaginary nature, yet this doesn’t make our interest decrease, it actually increases it. The natural and the artificial elements coexist in your works, not only materially, but also ideologically. In particular, your artwork “Campi Flegrei Conferenza”, which will be placed in Saluzzo, features the presence of natural and artificial volcanoes (which you identify with nuclear power plants). The volcano showcased in the center of the room will be created with elements found online, in imitation of their original features and their operation. So: do you think that fiction gives you a magnifying glass to better observe reality?

VLK – Fiction gives me the possibility to connect elements of reality with my own intimate logics. My Installations are often a hybrid out of conscious and subconscious decisions that move between the realm of reality and fiction. On a material level it is sometimes hard, especially when time passes from the making of an object, to see what is organic and what is synthetic eg. plastic or wood. I like this blur, physically and mentally, which leads to a reality on its own. The longer I am working in this method the more I got aware of handling certain parameters  and to give active space to the subconscious. The term “Metaphor” which I introduced in my exhibition at Kunstverein Nürnberg captured this process to some extent. The fusion of reality and fiction is also a way to show myself and not show myself.

LB – I’m going to ask you some more technical questions now: do you work directly on site when it comes to building your scenarios? If yes, what do you decide to keep or remove before the exhibition happens? Are you helped by assistants during the creation of your characters or are entirely realized by you?

VLK – It really depends. Certain projects I develop and execute completely in a/my studio and some others I arrange on side. By this I try to give myself a lot of flexibility and freedom to react towards the context of the venue, the surrounding and its history. Working in various collaborations over the last years, a situation in which you mostly have to hold yourself back for a better outcome, brought this openness as well as a self trust into my practice that I did not know before. In general so I work on my own but here and there when logistics of a project become too overwhelming I get a helping hand.

LB – I think that these kinds of settings would be suitable to stage a performance. Have you ever attempted this artistic practice? Have you ever physically joined one of your installations?

VLK – I always had a big interest in theatre and film as well as the aspect of stage design that comes with it. Oskar Schlemmer, Syberberg or the Corman/ Vincent Price productions would draw my attention among others.
Within painting and drawing I have dealt with the idea of the stage as well as in the installations themselves. The way how I handle material is also influenced by stage design and the illusion of props that appear within those narratives.
I have engaged my installations in a performative way, alone or with my band Steiketo but just recently I started for the first time to work with two friends that work in film and theatre to transfer mental and physical ideas of my work into those medias.

LB – Your work examines aspects of life on Earth during the Anthropocene Era. In general, does a glimmer of hope for humanity shine through in your works? Are you confident or skeptical about the developments that are taking place in the Anthropocene Era?

VLK – I am reluctant to diagnose an outcome for this scenario but I think one needs to be hopeful. Technology seems to develop with a high speed and opens doors in various directions. This knowledge as well as other achievements are not accessible to everyone since educational and economic structures are not equally distributed while other big parts of society seem not willing to give up their comfort and routine.
What I see is some hope within the younger generations who seem to be, in the range of their possibilities, proactive to make a change and are in general sceptic. By this they stand up against their “parents”.

I receive the art world as a very confusing bubble with regards to these tasks, torn between luxury and intellectualism and by this stagnant for real change.

LB – Relating to my previous question, we know that Dilldapps survived natural and artificial catastrophes. About this last topic, I can’t help thinking about the Covid-19 emergency. Do, or will, the Dilldapps face this kind of catastrophe too?

VLK – The Dilldapp, my alter ego, was born from a similar situation than Covid-19 in the first place or that is at least how I interpret his autobiographic come into being. Instead of an invisible virus it was the invisible threat of the Chernobyl Nuclear disaster in 1986 that brought radioactive particles like Iodine-131 or Caesium-137 to the area where I grew up. In my early twenties I got diagnosed with obsessive compulsive disorders and a thyroid under function (which stand in scientific correlation) that are strongly driven by contamination thoughts. All my life I would wash my hands, throw away objects and be in general fearful about an invisible threat. A behaviour that I experienced as individual became, through Covid-19, a collective disorder.
In regards to the Dilldapp, who is expression of this discomfort, I am not sure yet how these present circumstances will navigate and feed into its narrative and existents.

LB – Would you ever imagine your works not as physical and real presences, but as avatars able to reveal themselves only through the use of specific devices, e.g. via app?

VLK – I thought in this direction but sometimes I feel my installations already went through this “virtual” being, I see them as post- virtual. Maybe there are aspects of my work where something coded or rendered would make sense but at the moment I don’t see the necessity.