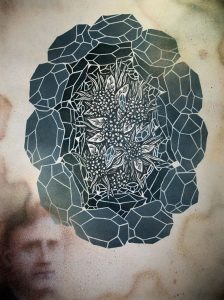 Traffic Gallery is proud to present large format artworks within On / Off exhibition. Eight internationally renowned artists who act since te beginning in the urban culture world. For each artist in alphabetical order we report some of the most important recent events; through wall painting, public installations, excellent collaborations, awards and museum exhibitions, the capacity of the urban world
introduce itself in all its possible artistic declinations.

Andreco (from Rome) : fresh about his recent great work of public art in Venice entitled CLIMATE 04 See Level Rise, and winner of the special Talent Prize award for which he will exhibit the next 12 December at Museo Macro in Rome.

Giorgio Bartocci (from Milano) : a tireless urban painter and spokesperson of liquid society theory he has recently collaborated with Nike global brand, a project of art custom for NIKE AF1 NBA.

Eron (from Rimini) : currently engaged in Milan for the mural art work W.A.L.L. (Walls Are Love’s Limits) inside CityLife district. A wall 118 meters long and 8 meters high near Milan City Fair. We also recall the beatiful mural made for the Musei Civici of Modena at Palazzo Santa Chiara during last September.

Lucamaleonte (from Rome) : a leading artist for the exhibition Cross the Streets at Macro Museum in Rome for the 40 years of the street and writing scene. He realized inside the Museum a spectacular wall painting entitled Mucchio di Fagiani.

M-city (from Poland) : his recent public art installation for the polish Festival Open City 2017 is aesthetically and conceptually very interesting. Pomnik Konny, an orange infatable equestrian statue which breathingair like a lung, rising and falling continually to remind us of the fate that most of the monuments suffer due to historical and political changes.

Nemo’s (from Nowhere) : his name is comparable to a contemporary Ulysses, he is irreverent and profane. He has no identity, he is no one, indeed he does not belong to anyone. He does not have a biography and we will not say anything about his recent works. But we know that most of you have clear in their mind his unpolitically-correct creations.

Orticanoodles (from Milano) : a special note goes to the project that sees them involved ORME – Ortica Memoria, the first district museum where the history of the ‘900 is painted on the walls. Between 2017 and 2019 twenty mural works will be planned and four of them are already realized, obviously wthin Ortica district in Milan.