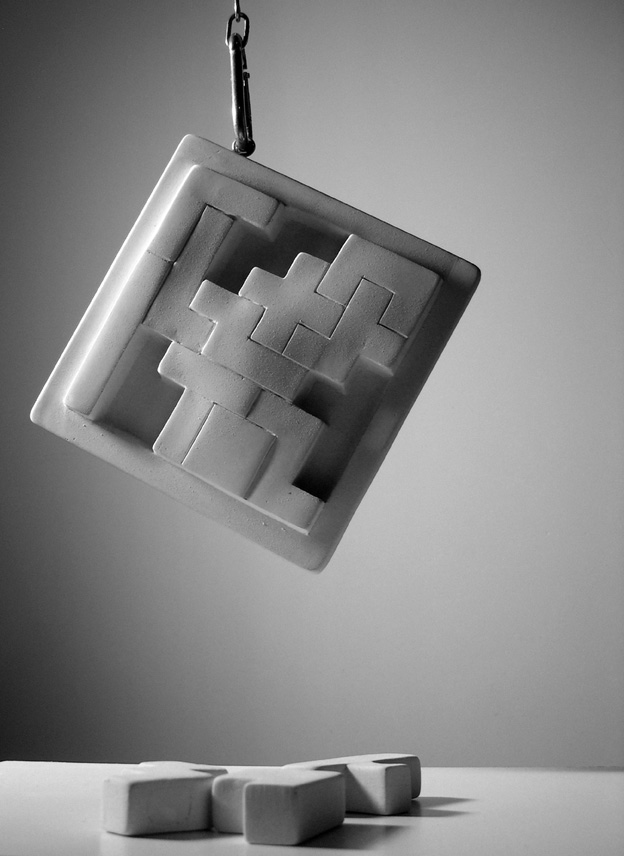 The exhibition is mainly based on the record of two of her most interesting performances: La Robe (2012) by Adriana Rispoli and Eugenio Viola, achieved at the Museo Madre of Napoli and Frammento Archetipo (Archetypal Fragment) (2016) by Angel Moya Garcia and Eugenio Viola at Tenuta dello Scompiglio, Lucca.
The theoretical starting point for both performances is James Hillman, psychologist and philosopher who became famous for his “Archetypal Psychology” theory according to which archetypes are models for psychic functioning, soul and myth roots.

Roxy’s research core is the body, which becomes the main input and tool for reality interpretation:

“Concentrating on themes belonging to the field of female identity, the artist delivers a fragmented universe, floating between irony and seduction, luxury and innocence, aggression and seduction. Her poetics delimits a fragmented and estranging universe suspended between imagines and symbols, dwelled by works at times enthralling and dangerous, attractive and repulsive, charming for their vaguely glamorous and precious aspect but also threatening, dealing with the “femme fatale” stereotyped seduction and delivering “ambivalent messages” (E.Viola)

The exhibition presents two medium-large sized pictures taken from performance La Robe – meaning the dress – action during which the body of the artist, in an extremely high tension atmosphere – enhanced by a hammering sound – frees itself from a superficial layer of white skin in a sort of cathartic metamorphosis, ending in a painful and passionate achievement of freedom with her naked body. As far as performance Frammento Archetipo is concerned, the gallery will present eleven sculptures, ceramic moulds of the originals used at Tenuta dello Scompiglio, hanged up with metal chains and placed in a space in a sort of oneiric crossing of symbols connected to the personal mythology of the artist. In the end there will be the videos of performing actions and a sarcastic sculpture called “Le Plumen”, a ready-made feather duster in steel, wood, ecoleather and unavoidable “domestic weapons”, a distinctive touch of the artist.

“As a member of the audience I fell in love with the work of Rosy Rox without having any previous interpretation key, text or philosophical theory for reference. Through the lens of a pure look, the emotion, the emphasis and the empathy of the performance have unconsciously moved my soul through the intermittence of imaginary ancestral symbols, which build what we have defined as collective consciousness over the centuries. What matters is the soft and fleeting glimmer of insight that overwhelms the audience obliging him to do soul.” (R. Ratti).

Rosy Rox is a visual artist born in Naples in 1976, where she lives and works. Sculpture, installation and performance are the main languages used in her artistic research. Since 2011 she has been working on il dono (the gift) a participation project in progress, defining the relationship between the past and art with the involvement of different social realities.